Worth knowing news
Do you know what Article 370 means? 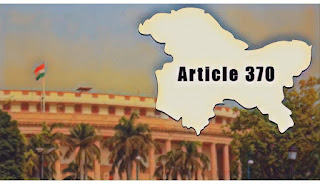 And what happens with removing it?

As per Article 370, Parliament has the right to make laws on defense, foreign affairs and communication about Jammu and Kashmir but it is necessary to give approval of the Central Government to the State Government for the implementation of any other related law.


Here's how to understand:

BJP's Prime Ministerial candidate Narendra Modi adopted a 370-point stream at the rally in Jammu, and a new debate on Article 370 has started after Modi's stance.
Shashi Talur's wife Sunanda Pushkar has also joined Jammu and Kashmir Chief Minister Omar Abdullah in the discussion.
Tell us if Article 370 is.

After independence, the smaller states joined the Union of India. Jammu and Kashmir was attacked by Pakistan-backed tribesmen before the process of joining the Indian Union.  They appealed to Kashmir to join India.
Gopalaswamy Iyengar submitted a draft 306-A, which later became Article 370 in the Federal Constituent Assembly.  Thus, Jammu and Kashmir received different rights from other states of India.


What are the rights:

- People from other states of India cannot buy land in Jammu and Kashmir.

- Jammu and Kashmir has a different flag.

- The Parliament of India cannot make any law in Jammu and Kashmir except for defense, foreign affairs and communications.

- Section 356 does not apply,
The President does not have the authority to repeal the Constitution.

- If a Kashmir girl marries an outsider
So his citizenship of Kashmir is stripped.

- President's rule cannot be taken in Jammu and Kashmir.