Monsoon news
The Meteorological Department has forecast big rainfall for these areas of north Gujarat, with heavy rains likely in the next two days 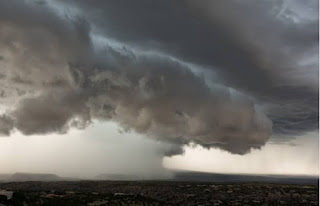 Heavy rainfall has been forecast for two days on August 14 and 15 in some areas of north Gujarat and central Gujarat due to low pressure between the Bay of Bengal and Odisha.
According to the Meteorological Department, heavy rains are likely in Banaskantha, Sabarkantha, Aravalli and Mahasagar and Dahod districts of North Gujarat.  Other areas of the state are also likely to receive light to moderate rainfall for the next five days.
The next 2 days in North Gujarat can be very heavy.  Due to this, the Megharana can irrigate many areas including Banaskantha, Sabarkantha, Aravalli, Mehsana.
Weather forecasts are forecast to produce winds of around 45 to 65 kilometers per hour in addition to rainfall, according to the Meteorological Department.  So that the fishermen's brothers are instructed not to take the sea for three days

Heavy rains have been forecast for the next two days in the state. Heavy rains have been forecast in central, north Gujarat, Saurashtra.
Red alert in some districts of Central Gujarat, Saurashtra is likely to turn north into deep depression low pressure.  Currently the rainfall system is towards north east Madhya Pradesh.  Depression is moving at 40 kph.  According to the system, rain will start in central Gujarat.  Fishermen brothers have been advised not to march for 3 days due to the possibility of rain in coastal areas.