Anda di sini : Home / Monsoon news / Meghraja has arrived in the country These areas will have huge rains 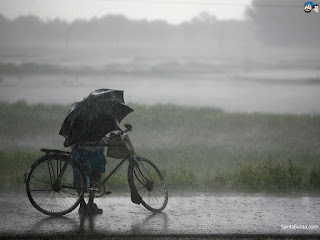 The southwest monsoon has reached almost in Madhya Pradesh and Maharashtra.  There was heavy rain in Mumbai on Tuesday.  In the last 24 hours in Uttar Pradesh, 17 people died due to heavy rains in many areas.  Rapti crossed the danger level due to flooding in the river.
There were flood water in the surrounding villages and farms.

Two people were stabbed in Raapti.  At least 16 people were killed and some people were burnt to death due to electricity in some places on Monday.  Delhi-NCR is likely to have a slow show on Tuesday night or Wednesday.  Himachal Pradesh and Shimla also received heavy wet weather.
In the next 24 hours there is speculation from heavy rain to heavy rains.

Heavy rain and heavy rain forecast in 24 hours in Madhya Pradesh
The Meteorological Department has declared alerts in 24 hours with cloudy and severe rain warning in Madhya Pradesh.  (Balaghat-Malda-Chhindwada-Khandwa and Jabalpur) are likely to get very heavy rains, whereas in 48 hours (Ujjain-Edge-Ratlam-Zabua-Indore) heavy rainfall is predicted.

According to the Meteorological Department (Punjab-Haryana-Chandigarh-East Rajasthan-West Madhya Pradesh), there will be heavy rains with heavy winds at around 30-40 kmph in 24 hours.  (Konkan-Goa-Arunachal Pradesh-Maharashtra-Gujarat-Madhya Pradesh-Uttarakhand-Bihar-Andaman Nicobar) has predicted heavy rains.

Meghraja has arrived in the country These areas will have huge rains
4/ 5
Oleh Dzire lamon
June 26, 2019 Komentar